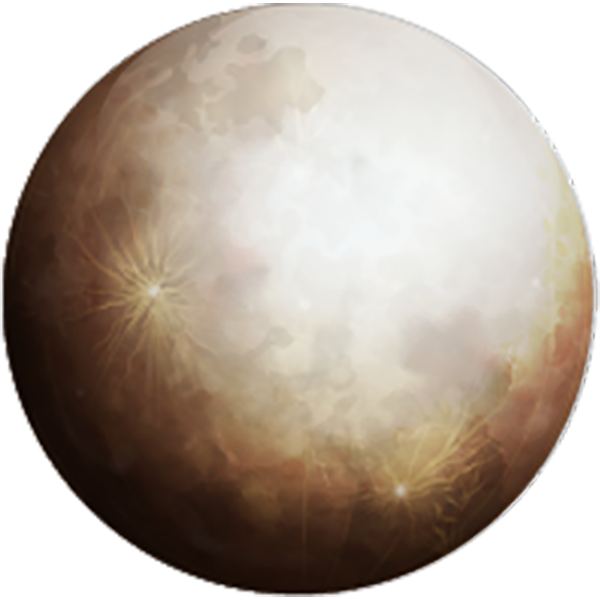 Pluto, God of the Underworld, is the ruler of Scorpio. (In Greek mythology, the corresponding god was Hades). In Astrology, the energies of Pluto are transforming. Pluto represents subconscious forces, ruling all that is "below the surface". On the up side, Pluto is associated with renewal and rebirth. It represents endings and new beginnings, as well as spiritual growth and rebirth.

Negative expression of Pluto is an obsessive desire for power and control and general destructiveness. In the chart, the position of Pluto by sign will be shared with other people in the same generation due to the comparatively slow movement of Pluto, the outermost planet, in the heavens. By house, the position of Pluto shows where individuals search for truths and deeper meaning. This area of life may be associated with change, upheaval, power struggles, and issues of control. Pluto in aspect to other planets in the chart colors those energies with obsessive qualities, power struggles, the need to find deeper meanings, and willingness to explore and examine. Where we find Pluto in the chart is where we either seek change and transformation, or have it thrust upon us if we refuse to accept our deepest needs. If we fear Pluto’s energies, or our "dark" side, destructiveness (both directed at ourselves or others) is a byproduct.

As the outermost planet in our solar system, Pluto is also the farthest from the Sun. Pluto was the latest planet to be discovered, in 1930, and while recently "demoted," is still a force in astrology. Pluto’s energy may be subtle, but its results will hit you like a ton of bricks. This planet is about transformation, regeneration and rebirth. Things aren’t pretty with Pluto, but they do get done. Pluto says "out with the old and in with the new", and we’d better be ready for it. If we’re not, this planet will simply have us wallow in our misery. Pluto asks us to transcend that which we know, redeem ourselves in the process, and come out stronger as a result.

For all that Pluto (re)creates (it also governs the reproductive system), it loves to destroy. This planet rules destruction, death, obsession, kidnapping, coercion, viruses and waste. That’s definitely not pretty. Pluto also governs crime and the underworld, along with many forms of subversive activity (terrorism, dictatorships). This planet is about all that is secret and undercover, that which is hidden from view. Is this the story of good vs. evil? Yes. No one will deny Pluto’s power (it rules atomic power, too) and intensity. This planet’s energy is often focused on the masses and what the collective will do. Pluto beseeches the masses to look inward (and to their subconscious) to see what’s there. It may be scary, but Pluto doesn’t care. This planet knows how to push buttons. It takes Pluto approximately 248 years to complete its orbit around the zodiac.

Due to the eccentricity of its orbit, it takes this planet between 12 and 31 years to pass through a sign. Pluto has been in Capricorn since January 24th, 2008, and will continue to be there until 2024. It exits Capricorn in 2023, but retrogrades for a while.

Pluto is the last of the transcendental planets and is the higher octave of Mars.